First edition of The Big Clock by Kenneth Fearing.

Prior to publication, an abridged version of this novel appeared in The American Magazine (October 1946) under the title “The Judas Picture.” In 1948, The Big Clock was adapted into a film noir of the same name, starring Ray Milland, Charles Laughton and Maureen O’Sullivan. An updated version of the film was made in 1987 and titled No Way Out, starring Kevin Costner and Gene Hackman. 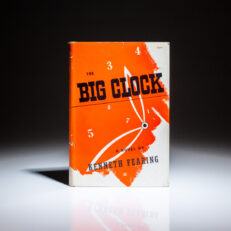