The Birth of Aviation

Octavo, [unpaginated]. Original wrappers, black plastic comb binding. Numerous black and white illustrations, faint foxing to illustrations. Inscribed by the author on the title page: “To Igor Sikorsky, Who did with the helicopter what the Wrights did for powered flight. Sincerely, Aycock Brown. Dec-17-1953.” Provenance: From the estate of Susana and Nickolai Sikorsky, the son and daughter-in-law of Igor Sikorsky. Estate sale in West Hartford, CT, May 2021. 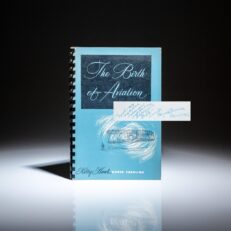