At the memorial service for Carl Sagan in 1996, Cornell President Frank Rhodes noted in his eulogy that “Sagan asked the big questions that others had given up. Not for him was the pursuit of science an activity of a closed and inward looking guild: for him, science was a means of public understanding and enlightenment.” Rhodes would also note that while Sagan had no “earthshaking discovery at Cornell,” he would be remembered more than most of the Nobel Laureates on campus because of his ability to communicate. 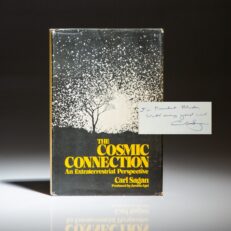