The Face Of Arizona

Limited edition of The Face of Arizona, signed by Senator Barry Goldwater

Folio (18in by 14in), [50pp]. Tan linen, title printed in black on spine. 50 photograph plates, tissue covered, from the Goldwater collection. Signed by Barry Goldwater on introductory page, with inscription. This is a limited edition of 1000 copies, this being number 482 of 1000.

Barry Goldwater was a five term senator from the State of Arizona. He was the Republican nominee for President in 1964. Although he lost to Lyndon Johnson, Goldwater is credited with launching the modern conservative movement. 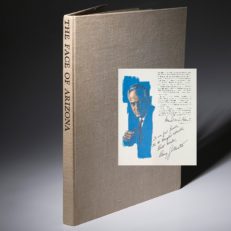