The Fruitful Bough – A Tribute to Joseph P. Kennedy

The Fruitful Bough by Edward Kennedy, inscribed to his friend and Harvard classmate, Richard Clasby.

This book is from the estate of Gail Cameron Wescott, the author of “Rose: A Biography,” about Kennedy matriarch, Rose Fitzgerald Kennedy, published in 1971. According to Kennedy archives the recipient of this book, Dick Clasby and his wife, Mary Jo [Gargan] Clasby, worked alongside Gail Cameron, conducting interviews with Rose Kennedy. Dick Clasby met his wife, Mary Jo Gargan, while vacationing at the Kennedy Hyannis Port home of Joseph P. and Rose Kennedy. Mary Jo was the niece of Rose Kennedy.

The Fruitful Bough was compiled and edited by Edward Kennedy in 1965. It is a collection of tributes to the patriarch of the Kennedy Family, Joseph P. Kennedy Sr. 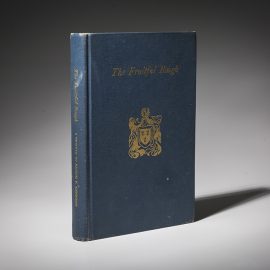