The two authors of this work served in the cabinet of President Herbert Hoover. They did not set out to write a biography of the former president, rather to lay out the “principles and policies both in philosophy of government and in action” of the Hoover Administration. Ray Lyman Wilbur served as the Secretary of the Interior and became the President of Stanford University. Arthur Mastick Hyde was the Governor of Missouri and became Hoover’s Secretary of Agriculture. 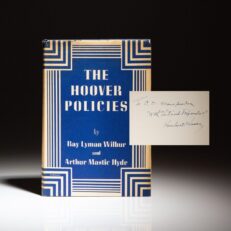