The Making of a Journalist

First edition of The Making of a Journalist, inscribed by Lady Bird Johnson to Jack Valenti. Octavo, 248pp. Contemporary green morocco, title in gilt on spine. Frontispiece portrait of author. Inscribed by former First Lady, Lady Bird Johnson on the half title: “For Jack and Mary Margaret – I hope you will enjoy this look at times – and people – we all shared. Love, Lady Bird. Christmas ’86.” 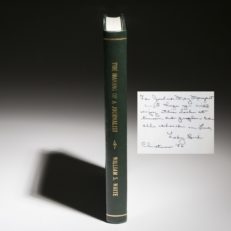