The Morning After – American Successes and Excesses 1981-1986

First edition of The Morning After by George F. Will, inscribed to baseball great Stan Musial. Octavo, xv, 430pp. Illustrated paperback, bright illustrations. Unread copy. Full number line on copyright page. Inscribed on front endpaper by George F. Will to Stan Musial with the following inscription: “To Stan – From the grandson of a Lutheran Minister in Donora, PA! George Will.” 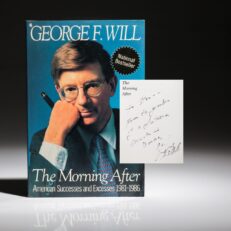