The Republic of Dreams

× Ask a Question re: The Republic of Dreams
SKU: 12137a Category: Modern Fiction

Octavo, [6], 663pp. Cream cloth spine, green boards, title in gilt on spine and front board. Stated “first American edition” on copyright page. Clean, solid text block, a touch of foxing on bottom edge, a near fine example. In publisher’s dust jacket, $22.95 retail price on front flap, slight toning on verso, some sunning to spine, a near fine example. This copy is signed and inscribed by the author on the half-title page: “Dear Mr. Isaac Bashevis Singer, You are a major writer of your people, of your language, of the human being imagination and spirit. I am much honored to succeed you in the Stanford Chair. Your admirer, Nélida Piñon / University of Miami, 23rd Jan. 1991.”

Nélida Piñon is an award-winning Brazilian author known for her specific use of the Portuguese language.

Isaac Bashevis Singer (1903-1991) won the 1978 Nobel Prize for Literature for his achievements as a writer. Singer was born in Poland and first published his work in Yiddish, but later translated it into English. He wrote children’s stories as well as fiction novels, primarily centered around his experience as a Jewish Polish-American growing up and living in wartime Europe and America. 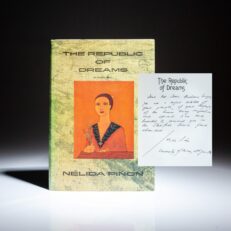