The Romance Of Leonardo Da Vinci

Inscribed to Igor Sikorsky by the president of Chance Vought Corporation, Eugene E. Wilson, The Romance of Leonardo Da Vinci from the Heritage Press.

Octavo, 580pp. Yellow leather, title on label affixed to spine. Rubbing and wear to all covers. Solid text block. Illustrated endpapers. Signed on the second front flyleaf: “January 12 – 1938 / To Igor Sikorsky, With warm personal regards. E.E. Wilson.” Provenance: From the estate of Susana and Nickolai Sikorsky, the son and daughter-in-law of Igor Sikorsky. Estate sale in West Hartford, CT, May 2021. 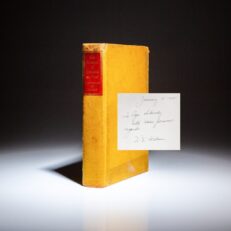 You're viewing: The Romance Of Leonardo Da Vinci $95.00
Add to cart