First edition, second issue, of The Sea-Wolf by Jack London, with illustrations by W.J Aylward. 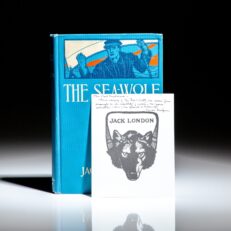