Octavo, [6], 372pp. Blue cloth, title in gilt on spine, title with star on front cover. Light edge wear, occasional wear to boards. Top edge gilt, which differentiates this limited edition from the first edition, published the same year. The first edition, first printing of this book contains a facsimile signature on the frontispiece portrait, where this limited edition was left blank for President Harrison to personally inscribe. The limited edition also includes the signature of Samuel Merrill below his portrait on Page 129. Only 100 of these limited edition copies were held for the publisher and signed by President Harrison below the frontispiece portrait. Additional gift inscription on front free endpaper which reads: “Grace Craven. from Ira Reese Craven. Aug 3, 1900.”

Following the call by President Abraham Lincoln for new recruits to the Union Army, Colonel Benjamin Harrison got the approval of Indiana Governor Oliver Morton to raise a regiment. He recruited volunteers from northern Indiana to serve in the newly commissioned 70th Indiana. After Harrison’s service during the Civil War, he ran for the governorship of Indiana and then served as the Senator from Indiana. In 1888, he was nominated by the Republican Party for President of the United States, taking office in 1889. He was defeated for a second term in 1892 by Grover Cleveland. 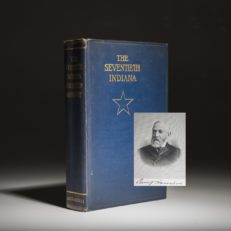 You're viewing: The Seventieth Indiana Volunteer Infantry $2,800.00
Add to cart