This book recounts the inaugural speech of President Gerald R. Ford, shortly after President Nixon left office to return to California. After being sworn in by Chief Justice Warren Burger, President Ford presided over a solemn ceremony and delivered his inaugural address. This speech is often remembered for the line: “My fellow Americans, our long national nightmare is over.” 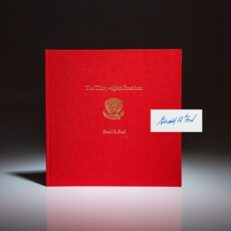 You're viewing: The Thirty-eighth President $325.00
Add to cart