The Unlikeliest Hero: The Story of Desmond T. Doss

Signed copy of The Unlikeliest Hero: The Story of Desmond T. Doss, the only contienous objector to receive the Medal of Honor in United States History.

Octavo, 199pp. Softcover, illustrated wrappers. Appears unread. Original publication was completed in 1967, this softcover was reprinted in 1988. The book is signed by Desmond T. Doss on the half-title, with an inscription that reads: “Tommy Curtis, Gold bless you. Sincerely, Desmond T. Doss, C.M.H. Prov. 3:5,6-” An exceptionally rare signed book.

Desmond Doss was a conscientious objector due to his religious convictions as a Seventh-day Adventist. He would serve as a combat medic in the Pacific Theater, earning two Bronze Stars and the Medal of Honor. He would become the only conscientious objector to earn the Medal of Honor in United States history. His story would receive national attention in 2016 with the release of Hacksaw Ridge, an Academy Award-nominated film depicting the life of Corporal Doss. 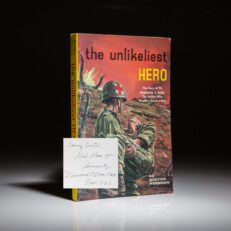 You're viewing: The Unlikeliest Hero: The Story of Desmond T. Doss $650.00
Add to cart