First appearance of “The Unparalleled Invasion” by Jack London in the July 1910 issue of McClure’s Magazine.

McClure’s Magazine, founded in 1893, began with investigative journalism looking to expose the injustices in the U.S. government and large corporations. The initial group of journalists working for the magazine left in 1906 to begin The American Magazine. McClure’s continued operations by focusing on literary works, publishing pieces by authors like Jack London and Rudyard Kipling, as well as art pieces by N.C. Wyeth, among others. 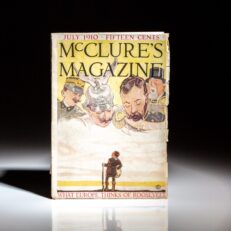 You're viewing: The Unparalleled Invasion – McClure’s Magazine $250.00
Add to cart