Early printing of The Yellow Danger by M.P. Shiel in the original paper wrappers.

M.P. Shiel (1865-1947) primarily wrote horror and science fiction novels, but began his career with varying work for hire roles. One of his first jobs was for a British publisher looking to capitalize on the concession crises in China around the turn of the 19th century. Shiel wrote a weekly series titled The Empress of the Earth, in which he included real headlines as the crises continued. Ultimately, in response to the success of the series, the stories were published as The Yellow Danger just one month after their conclusion. 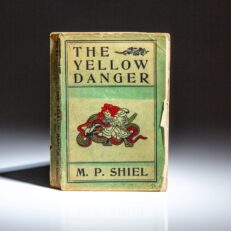