To Assure Pride and Confidence in the Electoral Process

× Ask a Question re: To Assure Pride and Confidence in the Electoral Process
SKU: 11263 Categories: Jimmy Carter, United States Politics

Octavo, vii, 358pp. Illustrated paperback, title on cover and spine. This copy appears unread. Signed by President Jimmy Carter on the half-title, with a full signature.

In the wake of the 2000 presidential election, a commission was established to look at the integrity of voting systems around the United States. The commission proposed improvements to federal, state and local voting systems. The recommendations resulted in landmark legislation called the Help America Vote Act, signed by President George W. Bush in 2002. 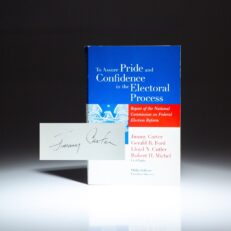 You're viewing: To Assure Pride and Confidence in the Electoral Process $275.00
Add to cart