To Seek A Newer World

Limited edition of To Seek A Newer World by Robert F. Kennedy, inscribed to Mrs. Alice Roosevelt Longworth. Octavo, xvi, 233pp. Blue morocco, title in gilt on spine, raised bands. Blue linen end papers. Top edge gilt. Stated “first edition” on copyright page. Following the publication of this book in 1967, Robert Kennedy had a limited number bound in leather as Christmas Gifts. This copy was inscribed by Senator Robert Kennedy for Alice Roosevelt Longworth. Inscription reads: “For Mrs. Longworth – For Christmas and for many other things. If I didn’t see you every once in a while in Washington, I don’t believe I could hardly stay. XXOO. Bobby. Christmas 1967.”

Comments: Although she was a lifelong republican, Alice Roosevelt Longworth was close to the Kennedy Family. She frequently attended White House events as a guest of honor and dined with Senator Robert F. Kennedy at his home. Alice Roosevelt Longworth was the eldest daughter of President Theodore Roosevelt and his first wife, Alice Hathaway. She married Ohio Representative Nicholas Longworth, who was Speaker of the House during the 1920s, until his death in 1929. Alice would spend the remainder of her life in Washington DC, working through political circles and supporting causes she believed in. She would pass away at the age of 96 in 1980. 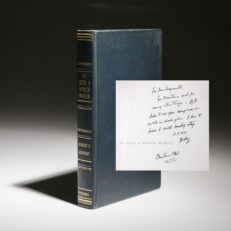