First edition of Warren Gamaliel Harding: President of the United States, attributed to William Estabrook Chancellor. This controversial “study” suggesting that President Harding had an African-American ancestor was successfully suppressed by government agents.

This controversial work was attributed to College of Wooster professor William Estabrook Chancellor, who challenged Harding’s Republican presidential nomination in 1920. This racist “study” asserted that Warren G. Harding had African American ancestors, with the hope of damaging his chances of reelection in 1924. The book correctly identified the corruption in the presidential nomination process, the illegal ties to corporate oil interests and the president’s cardiovascular disease, which led to his untimely death in 1923. When the book was published in 1922, Harding abused his presidential powers to suppress its publication, leaving only a handful of copies in existence. The full story of the scandal was published in 2017 by Monte Robison, titled “The Chancellor Affair: The FBI File: The True Story about How President Warren G. Harding Abused Power in the White House and Silenced His Most Vocal Critic.” 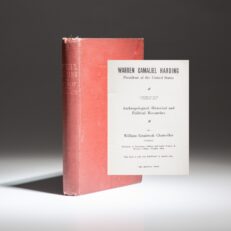 You're viewing: Warren Gamaliel Harding: President of the United States $2,800.00
Add to cart