A collection of signed photographs, inaugural programs, letters, and documents from the archive of White House Special Assistant Sue Mathis-Richard.

Comments: Sue Mathis, later Sue Mathis-Richard, served in the White House Media Liaison Office beginning in 1981. After the shooting of Press Secretary Jim Brady, her office was reorganized, and the office of Media Relations was created. In 1984, Mathis become the Director of Media Relations. In 1987 she left the White House and assumed a position as corporate communications director for Walt Disney Corporation. In 1988, she was asked to join the Bush-Quayle campaign, serving as the Florida communications director. 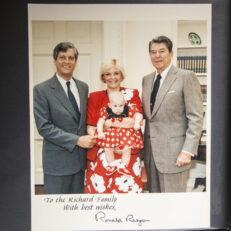