Comments: The two authors of this book were political adversaries during the election of 1908. William Jennings Bryan was a three time democratic nominee for president. The winner of the 1908 election, William Howard Taft, never had grand aspirations for the presidency, but was the heir apparent after the administration of Theodore Roosevelt. In this unique work, both politicians argue the merits of isolationism, international politics and the League of Nations. 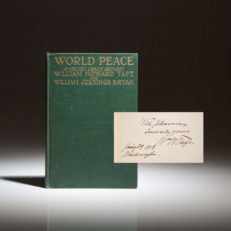