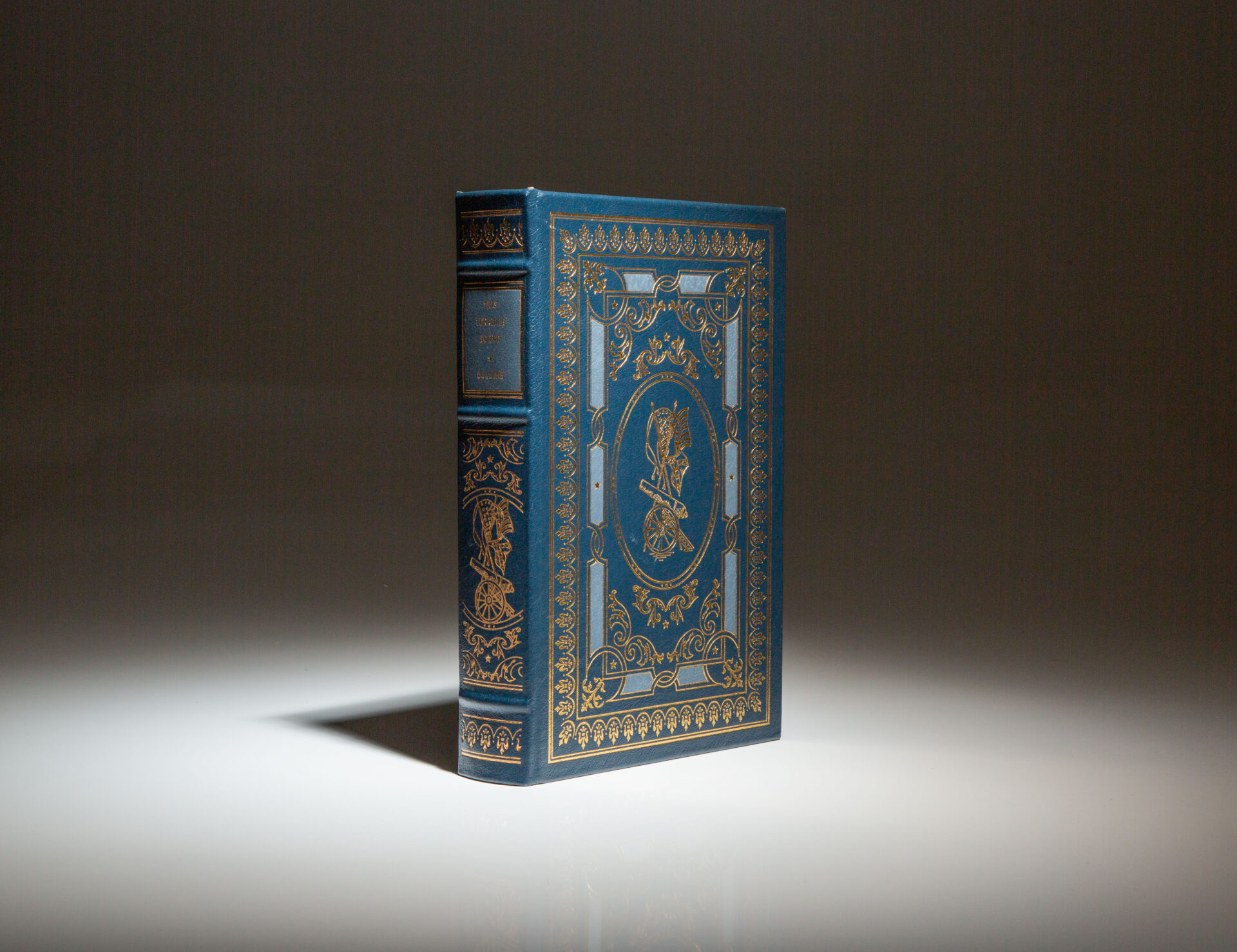 Signed copy of This Terrible Sound: The Battle Of Chickamauga from The Easton Press, from the personal library of the author, Peter Cozzens.

Peter Cozzens is an award winning author of numerous books on the Civil War and the Indian Wars of the American West. He served as a Foreign Service Officer for the United States Department of State and was awarded the department’s William R. Rivkin award for service in 2002. He is the recipient of the 2017 Gilder Lehrman Military History Prize and the 2016 Caroline Bancroft Prize for history. Some of his works include: The Earth Is Weeping: The Epic Story of the Indian Wars for the American West (2016), This Terrible Sound: The Battle of Chickamauga (1992), and The Shipwreck of Their Hopes: Battles for Chattanooga (1994). His next book will be Tecumseh and the Prophet: The Shawnee Brothers Who Defied A Nation, expected in 2020. 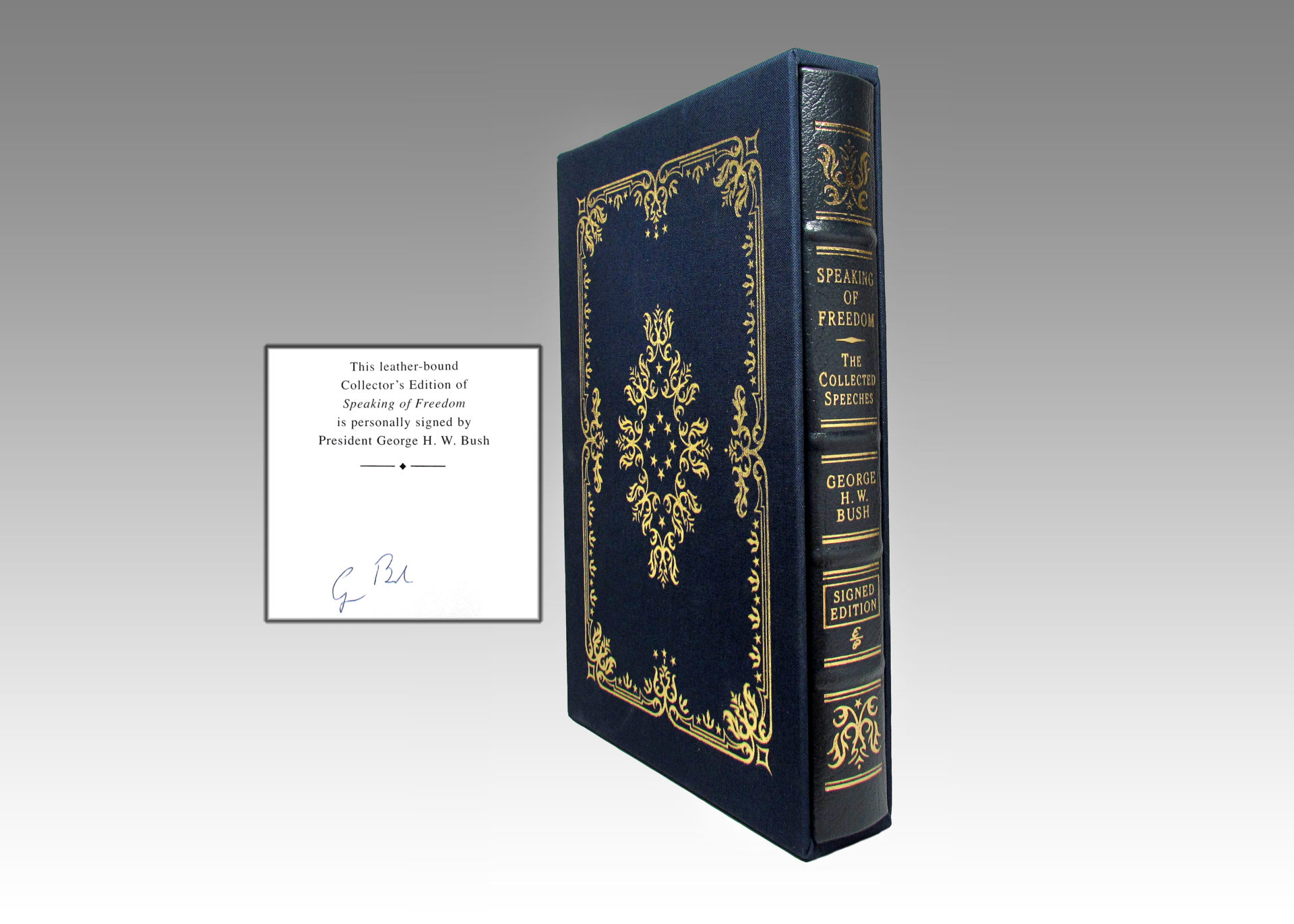 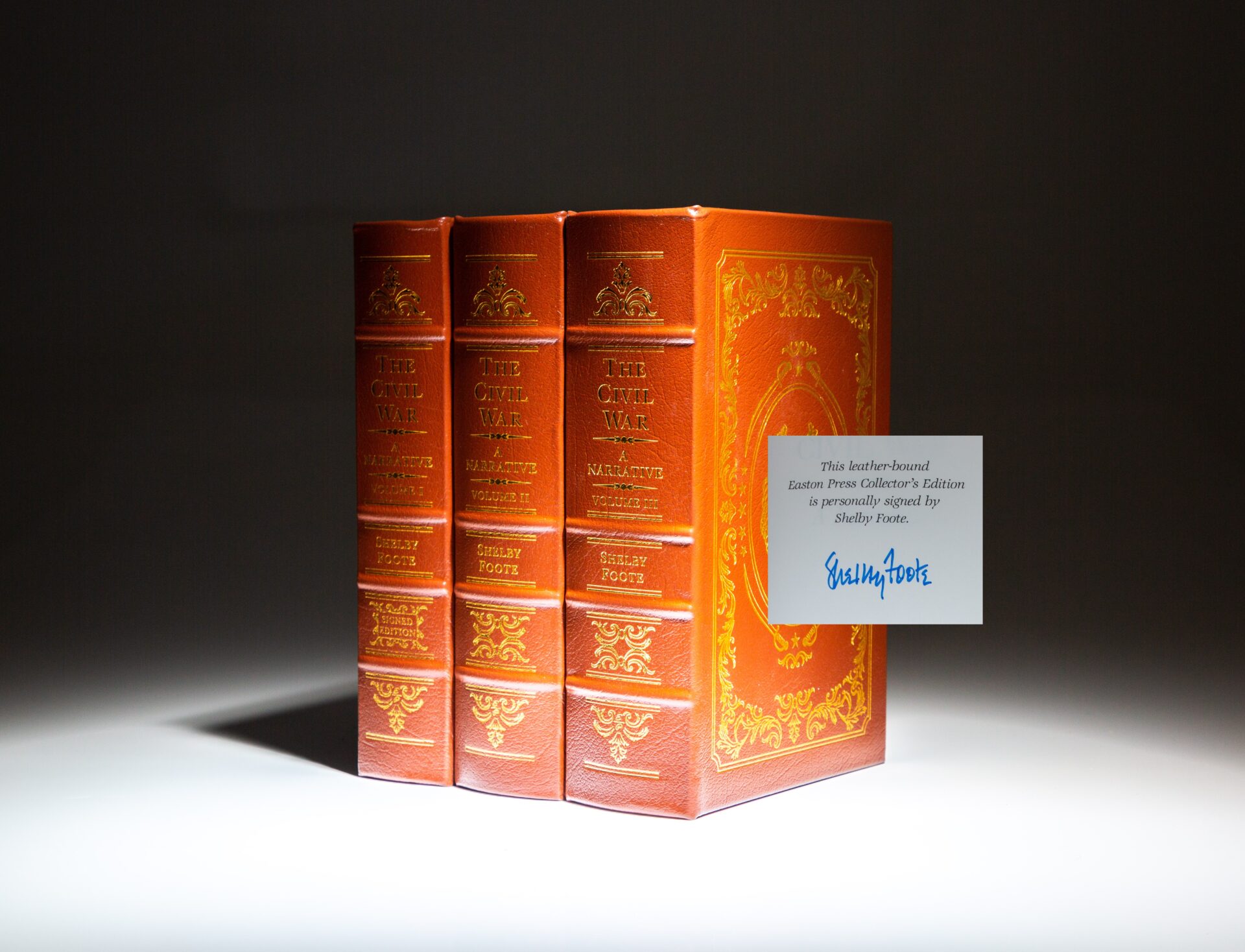 From The Easton Press, The Civil War: A Narrative, signed by the author, historian Shelby Foote.

Thick octavo, [three volumes]. All three volumes bound in full brown leather, title in gilt on spines, raised bands. Decorative gilt illustrations on covers. Silk endpapers, all gilt leaf ends. None of these volumes have been previously read, all in fine condition. Does not include any paperwork from The Easton Press. This set is signed in Volume I by Shelby Foote. A desirable set.

This set includes all three volumes: Fort Sumter to Perryville, Fredericksburg to Meridian, and Red River to Appomattox. 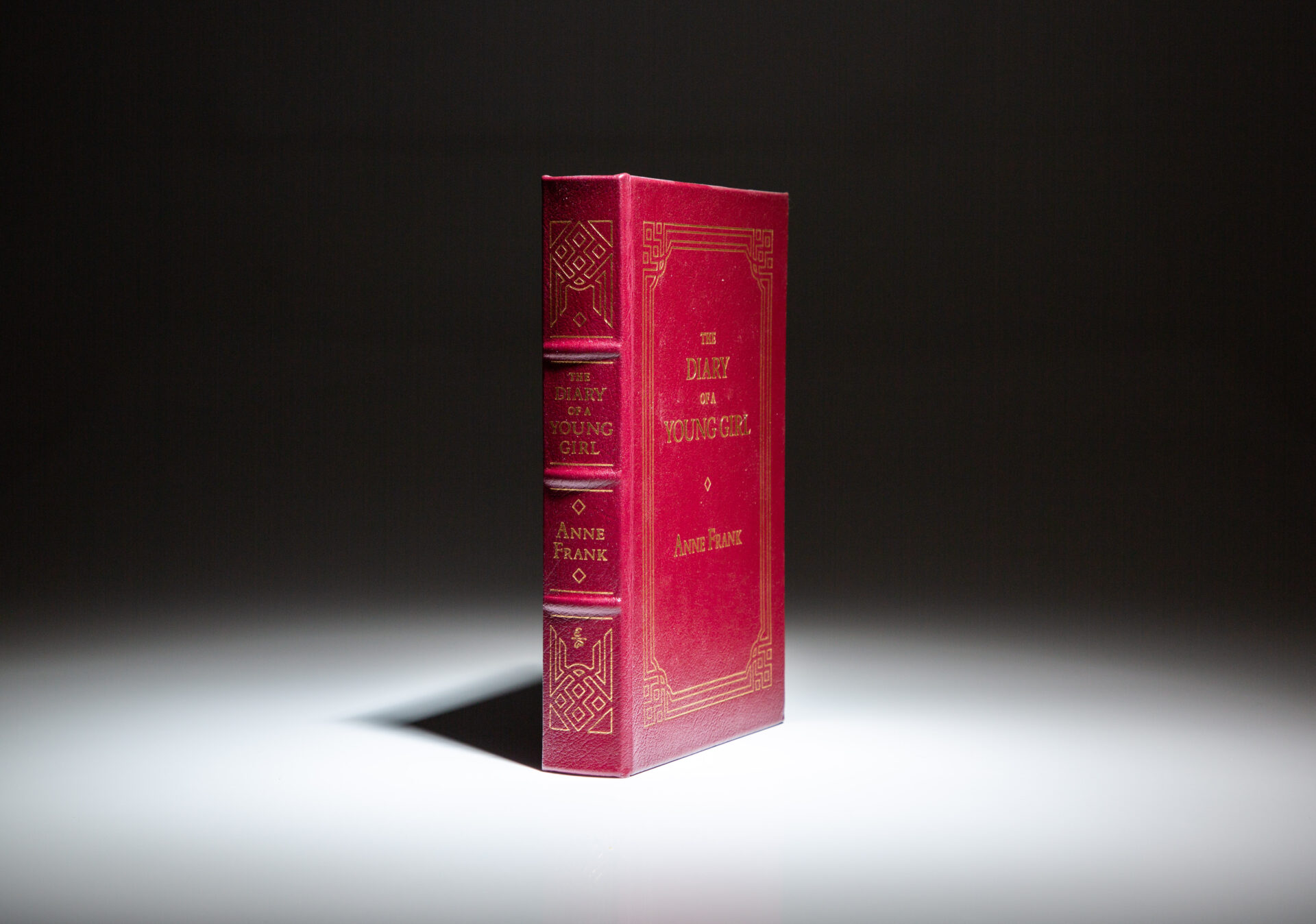 The Diary of a Young Girl by Anne Frank, from The Easton Press.

Het Achterhuis or The Secret Annex, was first mentioned publicly in an article in Amsterdam in 1946, written by Jan Romein. The diaries were in the hands of Otto Frank, Anne’s father, who was interested in finding a publisher. The newspaper article piqued the interest of Contact Publishing, who produced a first edition of 3,036 copies on June 25th, 1947. The first edition of Anne Frank’s diaries contained the earliest printed version of her diaries. A second printing of the diaries was published in December of 1947. (Books of the Century, 180, 183) (Anne Frank House) The Definitive Edition, reproduced here by the Easton Press, contains material previously left out of earlier versions of the diaries.

The Deluxe Collector’s Edition of The Complete Works of William Shakespeare, complete in 39 Volumes, from The Easton Press.

This set is a re-creation of the 1901 Chiswick Shakespeare, with illustrations by Byam Shaw.

Octavo, [39 volumes]. Full burgundy leather, title in gilt on spines, raised bands, gilt decorations on all covers. Frontispiece in each volume. Printed on acid-free, archival paper stock. All silk endpapers, gilt leaf ends. Silk bookmark in each volume. All appear unread and in fine condition. Part of the 100 Greatest Books Ever Written series from the Easton Press.

This set contains the following titles: 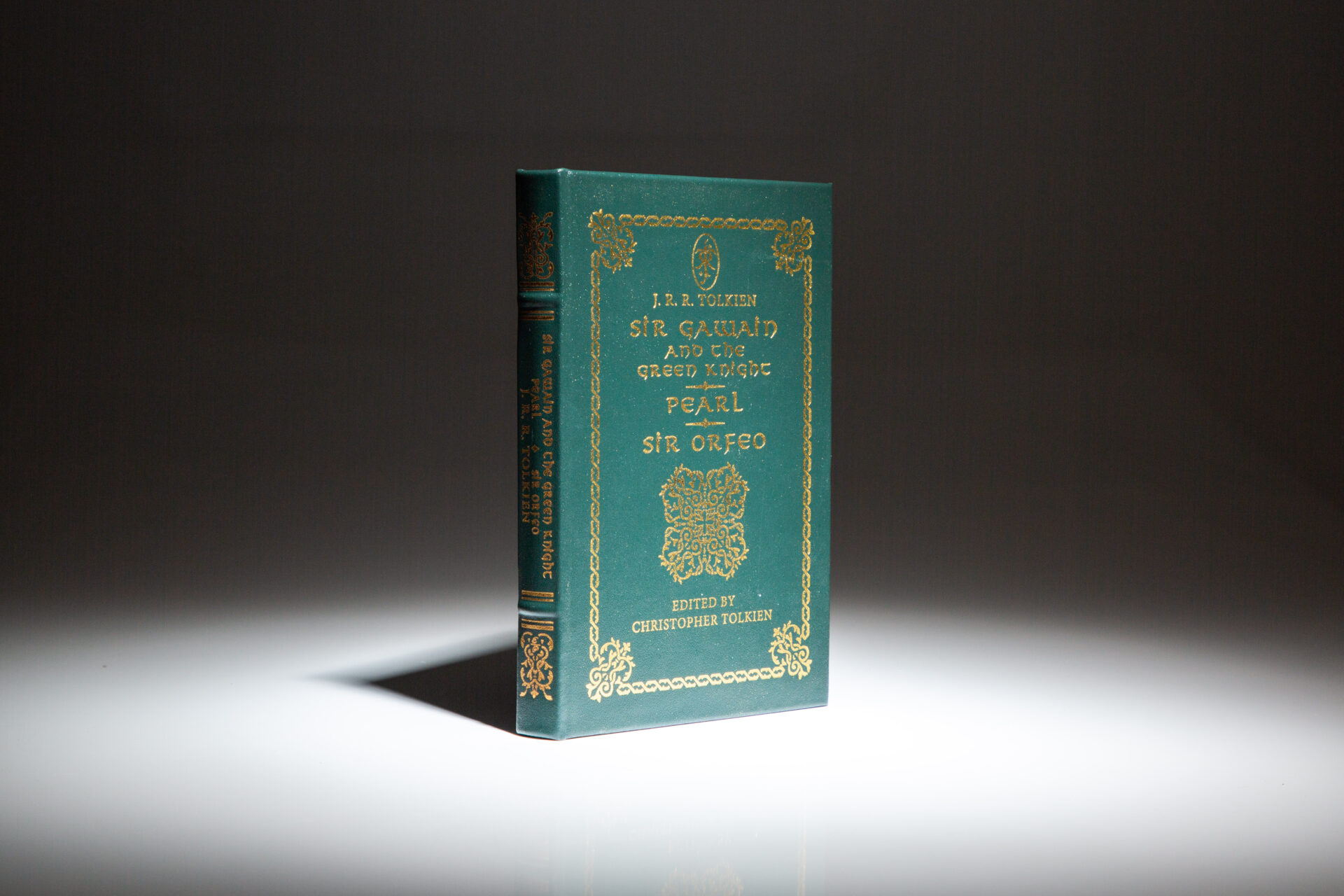 Collector’s Edition of Sir Gawain and the Green Knight translated by J.R.R. Tolkien, from The Easton Press. 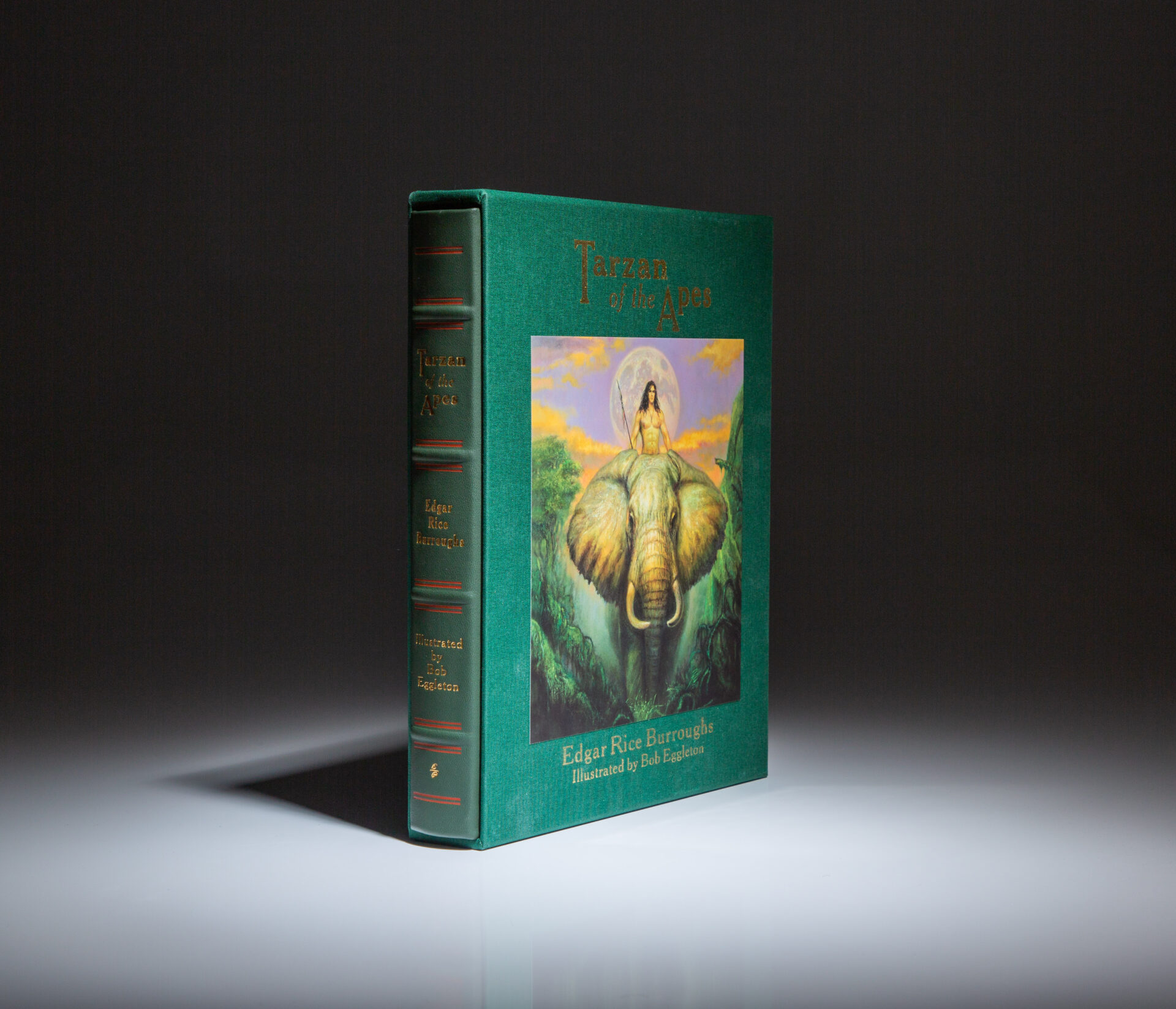 From the Easton Press, limited edition of Edgar Rice Burroughs’ Tarzan of the Apes, signed by the illustrator, Bob Eggleston. 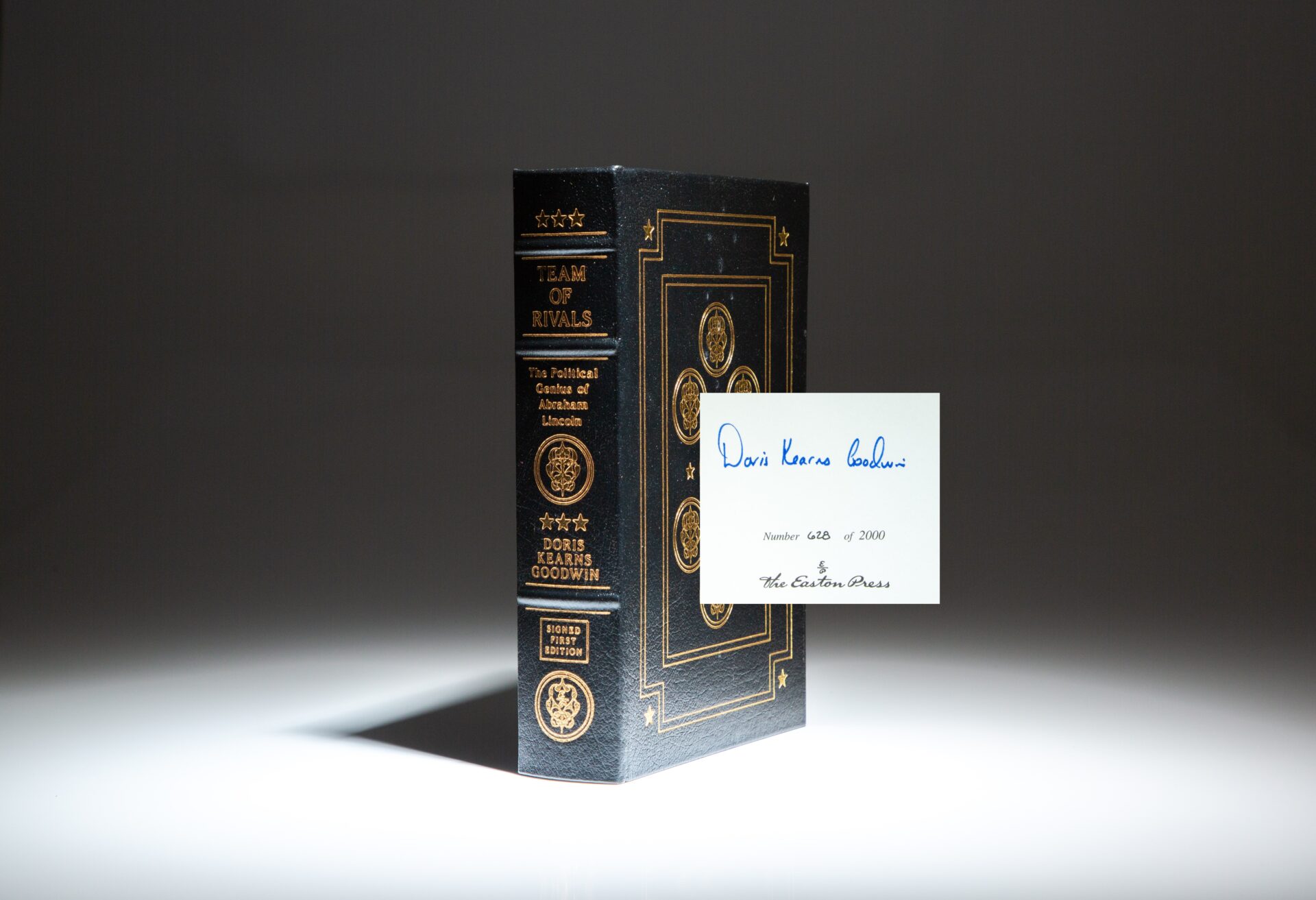 Team of Rivals was a New York Times best-selling history of the Lincoln Administration, which was adapted into a movie in 2012. The movie, Lincoln, was directed by Steven Spielberg and starred Daniel Day-Lewis as Abraham Lincoln. 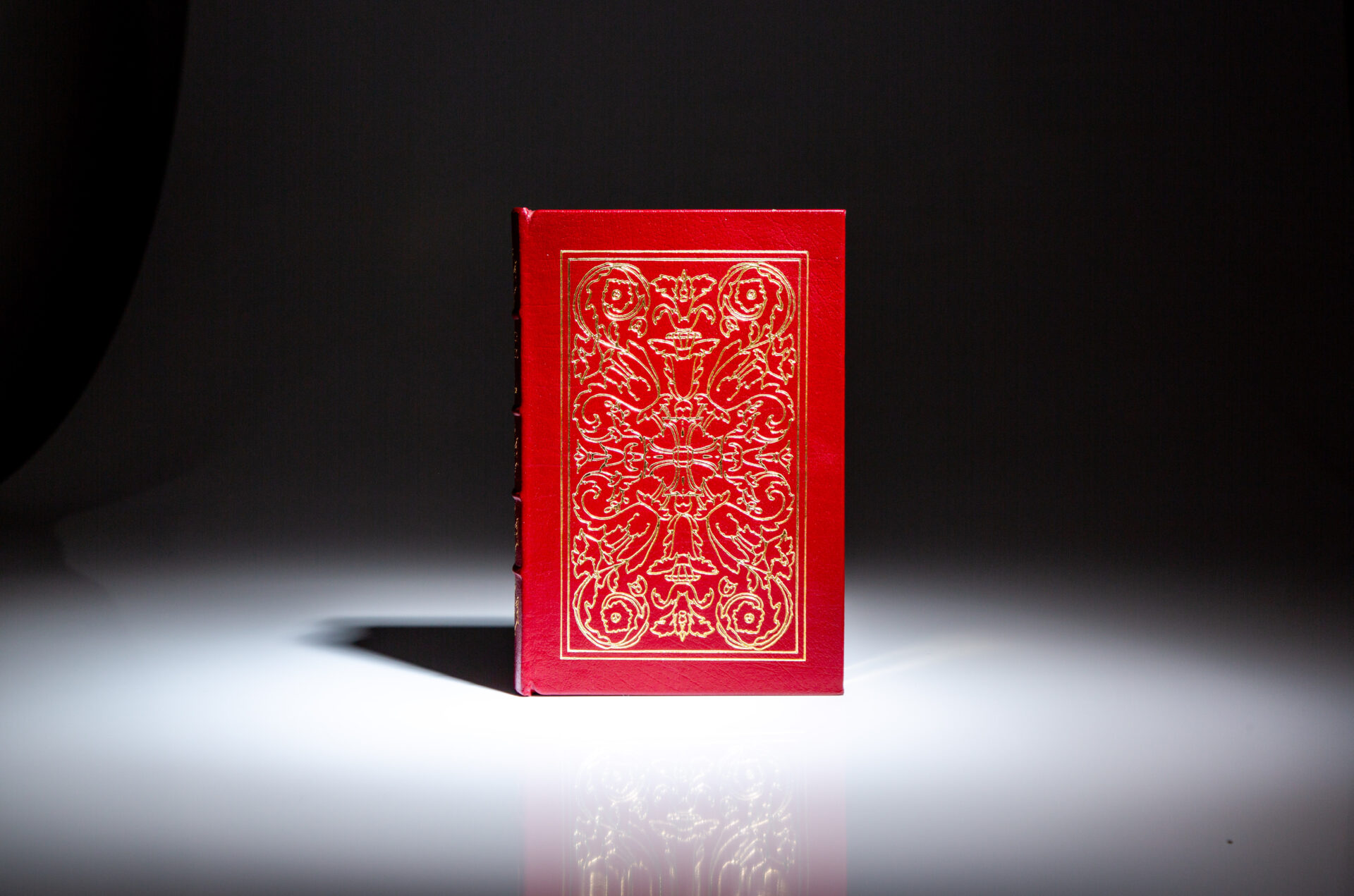 Two volume set of Doctor Zhivago by Boris Pasternak, from The Easton Press. 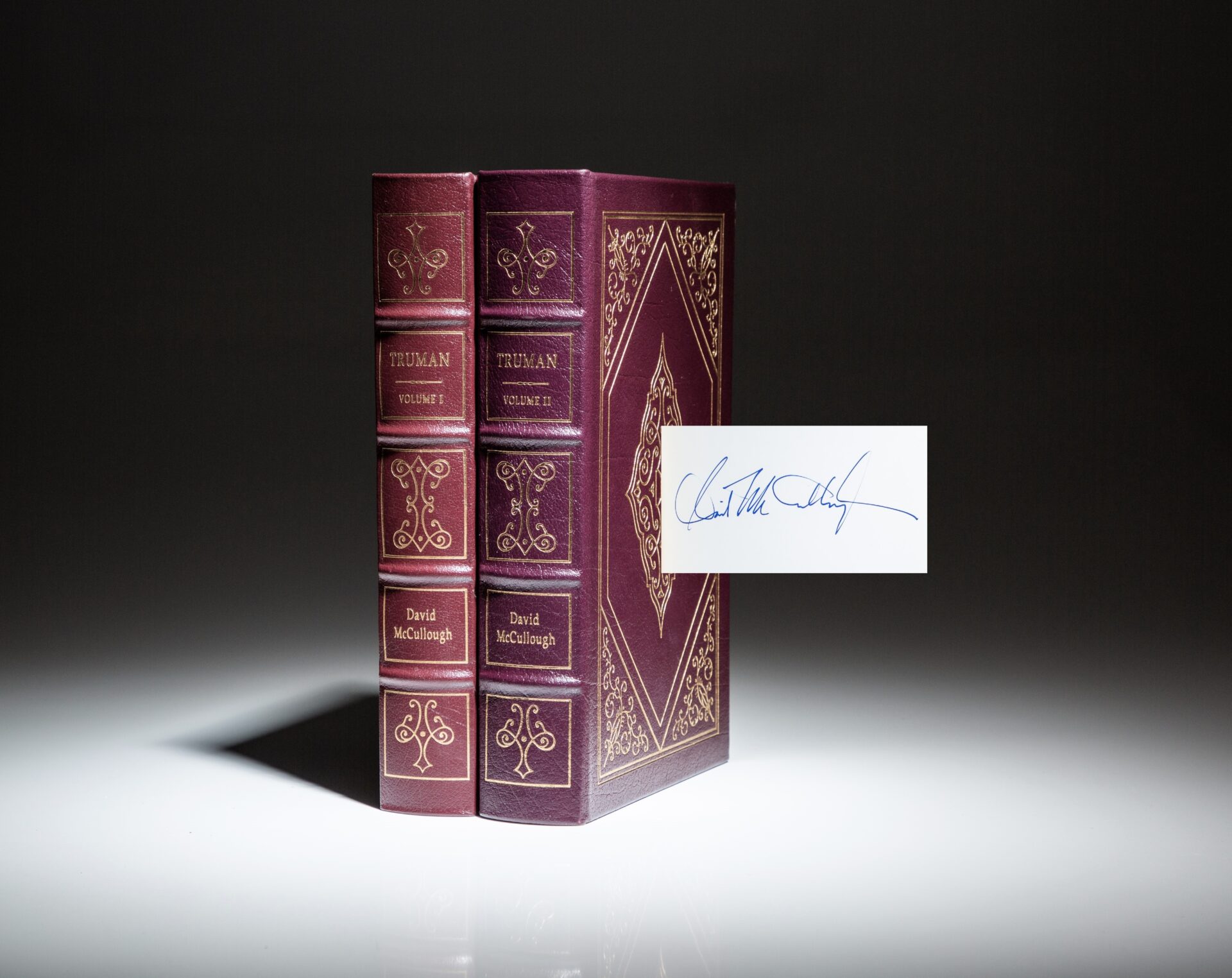 Signed collector’s edition of Truman by David McCullough, from the Easton Press.

This Pulitzer Prize-winning biography by author and historian David McCullough is part of a series of works that have helped to rehabilitate the legacy of President Harry Truman. Recent historians consider Truman’s time in office as one of the most consequential in American history, often ranking him in the upper tier of Presidents. 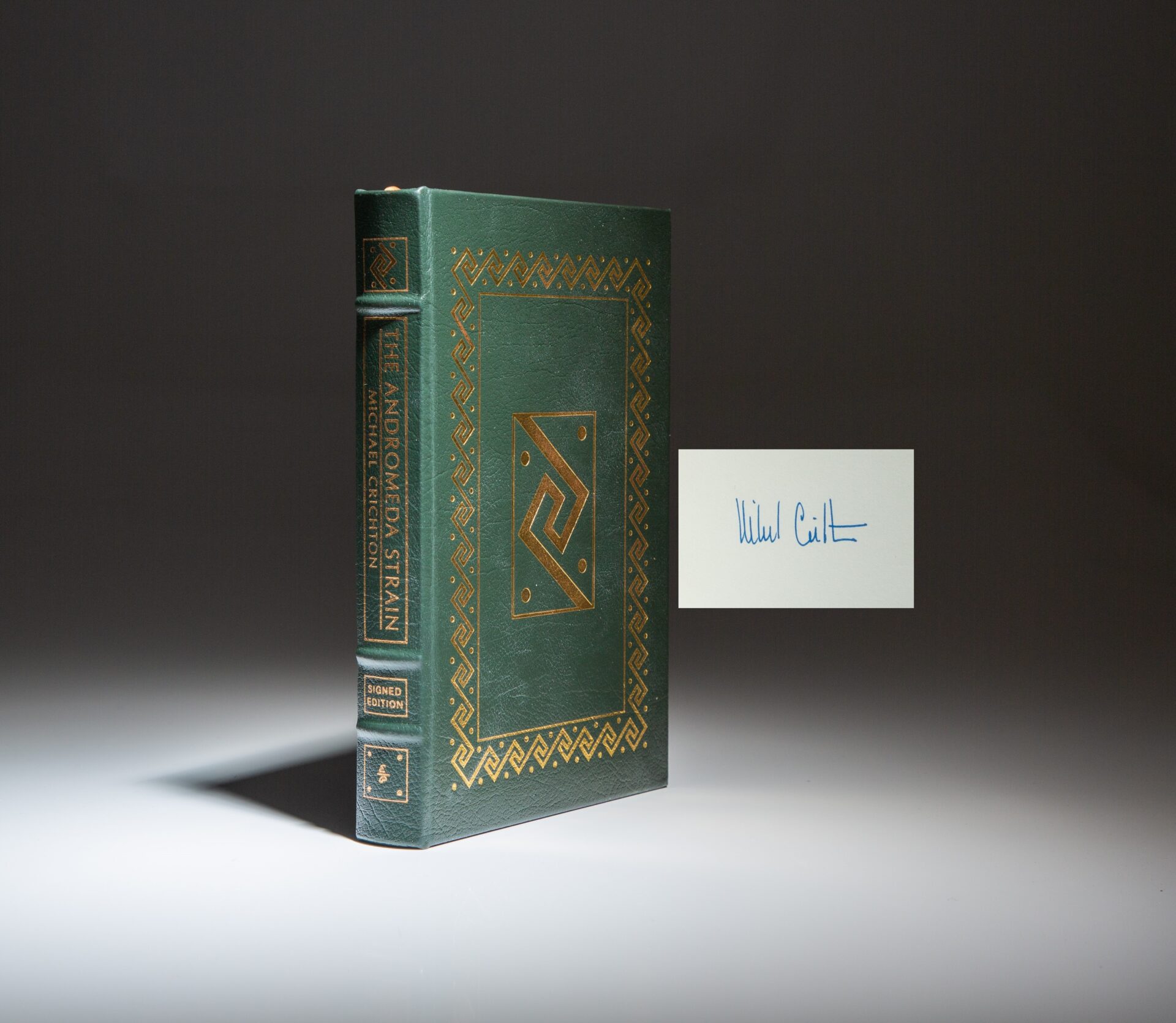 Signed collector’s edition of The Andromeda Strain by Michael Crichton, from the Easton Press.

Octavo, 295pp. Dark green leather, title in gilt on spine. Decorative gilt design on cover and spine. All gilt edges, silk endpapers and silk bookmark. Signed by the author on the signature page. Includes paperwork from the Easton Press.

Michael Crichton’s techno-thriller Andromeda Strain, which established him as a writer in this genre. 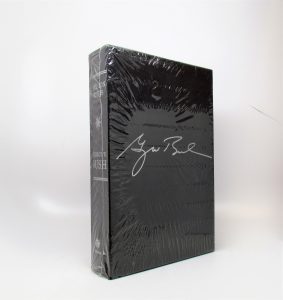 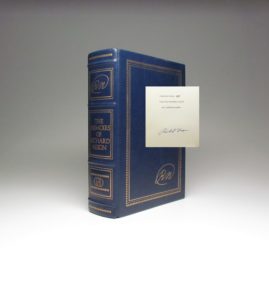 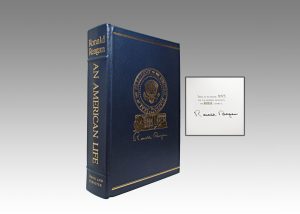 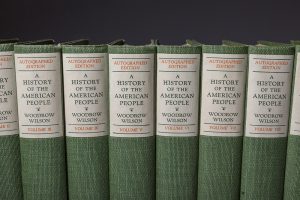 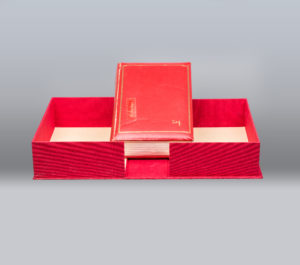 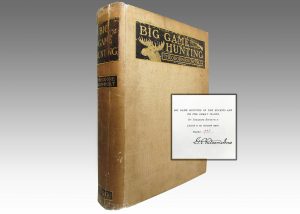 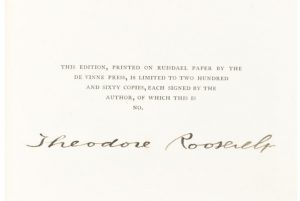 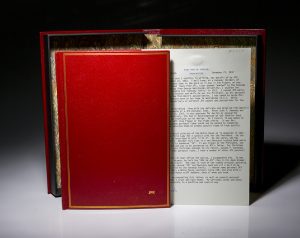 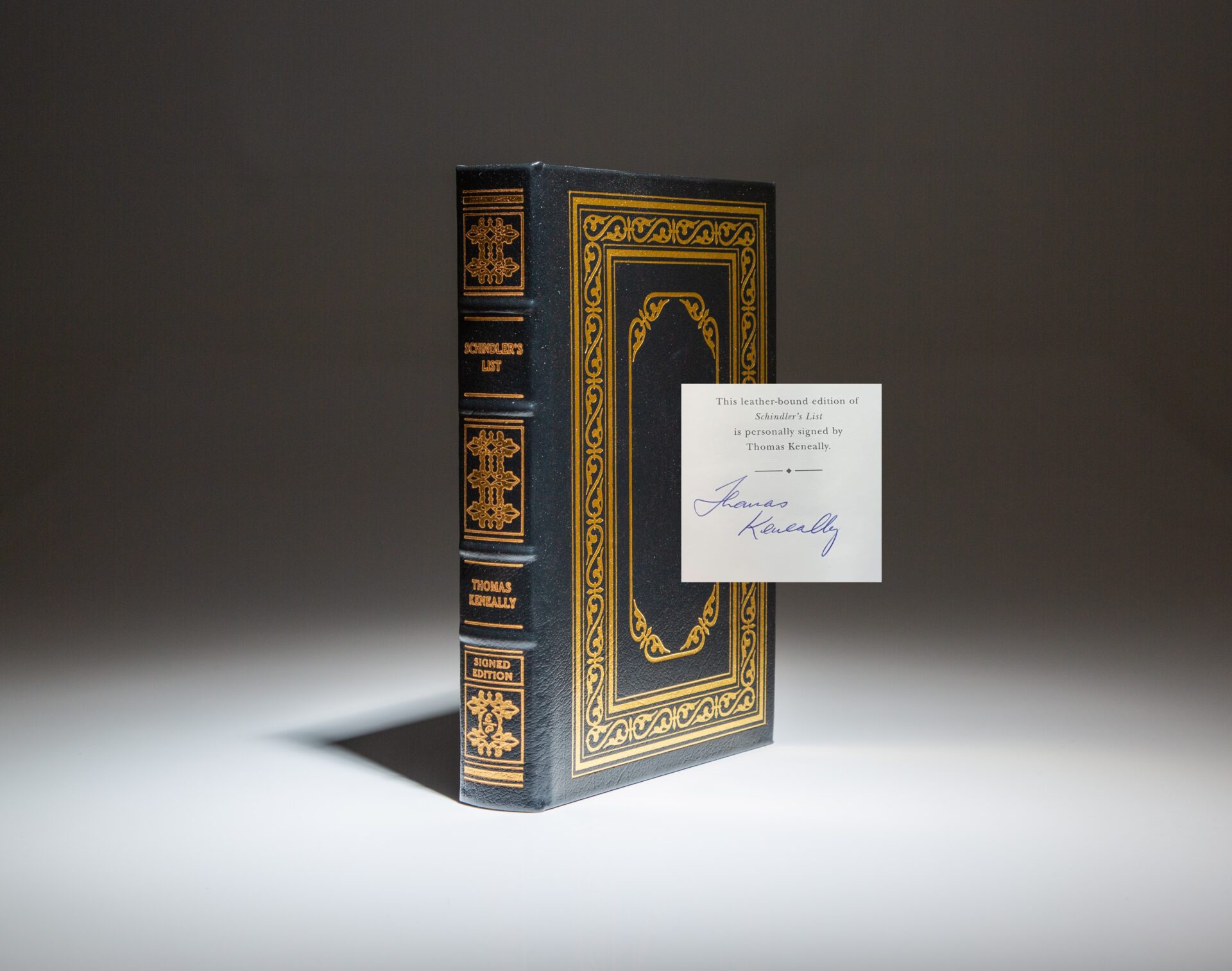 Signed collector’s edition of Schindler’s List by Thomas Keneally, from the Easton Press.

Octavo, 398pp. Black leather, title in gilt. Gilt decorations on cover and spine. All gilt edges, silk endpapers and silk bookmark. Book has never been read. A fine example. Signed on the signature page by the author. Includes the Easton Press authentication paperwork. 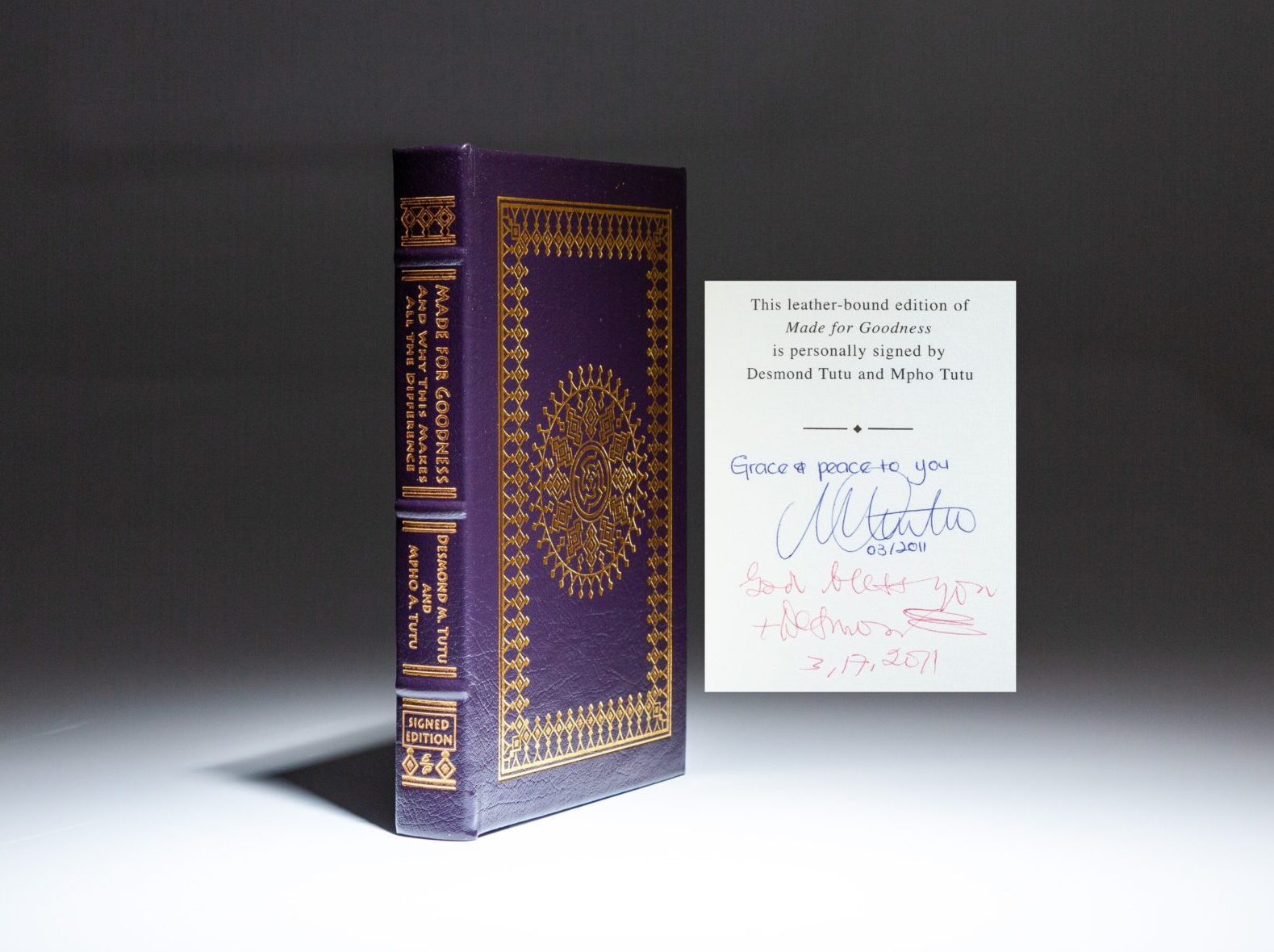 From the Easton Press, deluxe signed edition of Made For Goodness: And Why This Makes All the Difference, signed by Desmond M. Tutu and Mpho A. Tutu. 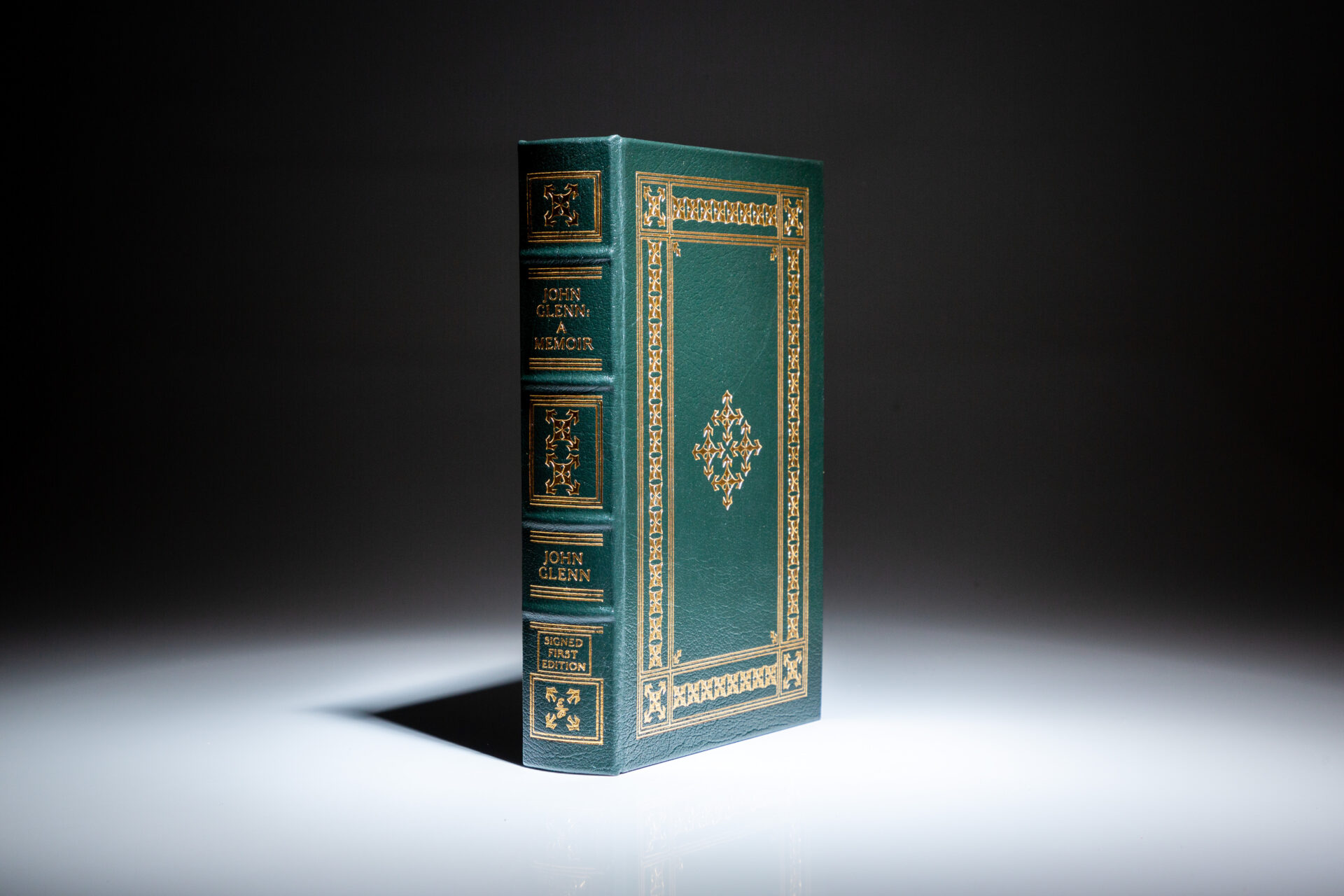 From the Easton Press, John Glenn: A Memoir, signed by Senator John Glenn.

Octavo, 422pp. Blue leather, title in gilt on spine. Silk endpapers, all edges gilt. Includes paperwork from the Easton Press. Signed on the limitation page by John Glenn, this copy being number 1791 of 3500. A fine example.