Limited edition of 1976: Agenda for Tomorrow by Stewart Udall, inscribed to his Chief of Staff, Henry L. Kimelman. Octavo, 173pp, gilt title on spine, gilt decorations, gilt leafs, brown calf skin. Produced for the personal use of Secretary Udall. Inscription on frontispiece to Ambassador and former Chief of Staff to the Secretary of the Interior, Henry L. Kimelman. Inscription reads: “To Henry – Who’s friendship has meant so much to me for these last two years – and with thanks for helping me shape my own agenda for tomorrow! Steward Udall. Jan. 1970.”

Comments: Steward Udall served as Secretary of the Interior from 1961 – 1969. His Chief of Staff Henry L. Kimelman served as the finance chairman for the George McGovern and Frank Church campaigns in the 1970’s. He was a senior political advisor for George Hart in 1988. He retired in 1990 and wrote Living The American Dream in 1997. 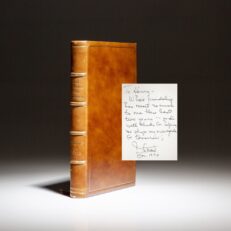