Includes ten individual pieces of ephemera from the event, including an invitation, table card, program, and dinner/reception tickets. All previously mounted in a scrapbook, with faint residue from mounting putty on versos. Housed in custom blue cloth folder, title on cover.

The lead item is signed: “To Jim Barnes – With Best Wishes. Ronald Reagan.”

“With all that’s going on right now, I’m afraid I’m not going to run for President in ’96. However, I have not ruled out the possibility of running again in 2000.” – Ronald Reagan, February 3rd, 1994, an address before the 1994 Republican National Committee’s Gala in honor of his 83rd birthday.

A few in the crowd noticed that President Reagan repeated two lines during the speech, but nobody assumed this would be his last public speech. He followed this appearance with a handful of recorded addresses and an appearance at Richard Nixon’s funeral, but he recede to disappear from the public stage. Nine months after this speech, he announced that he was suffering from Alzheimer’s disease. He kept regular office hours through 1999 and died in 2004. 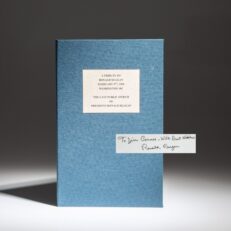 You're viewing: A Birthday Salute to President Ronald Reagan $1,850.00
Add to cart