In My Time – A Personal and Political Memoir

Limited edition of In My Time, signed by Vice President Dick Cheney.

Book is signed on the limitation page, with associated paperwork from the Easton Press.

Comments: Former Vice President Richard Cheney began his political career serving in the House of Representatives, representing the state of Wyoming. He had previously served as White House Chief of Staff for President Gerald R. Ford. In 1989, he was called upon by newly elected President George H.W. Bush to serve as Secretary of Defense. In 2001, he would be asked to serve as Vice President for George W. Bush. He is often considered one of the most influential Vice Presidents to serve in the United States. 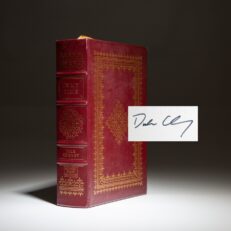 You're viewing: In My Time – A Personal and Political Memoir $350.00
Add to cart