Signed limited edition of A Green Bough by William Faulkner. 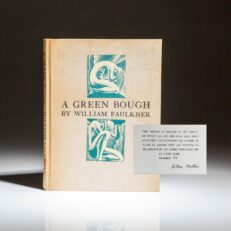