A Journal of Reparations

First edition of A Journal of Reparations by Vice President Charles G. Dawes, inscribed to Robert H. McCormick of Chicago.

A Journal of Reparations recounts the work of the Allied Reparations Commission of 1923, which developed a plan to resolve the issue of World War I reparations from Germany. What became known as the “Dawes Plan” ended a diplomatic crisis that followed the signing of the Treaty of Versailles. Charles Dawes shared the Nobel Peace Prize for 1925 for his work in resolving this crisis, which helped Germany reestablish the backbone of their economy. In the long-run, the reemergence of Germany as an industrial power would lead to military buildups and eventually World War II. 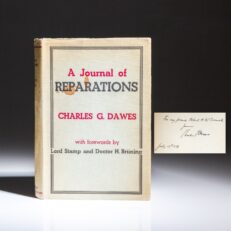 You're viewing: A Journal of Reparations $375.00
Add to cart