Konrad Adenauer (1876-1967) was the first chancellor of West Germany, from 1949-1963, leading the recovery of Germany from the ruins of World War II into a prosperous economic power. He remains the oldest-ever European head of government, resigning at the age of 87, but remaining active in German politics. This work by Helmut Kohl pays tribute to Adenauer’s many years of public service and was issued on his 100th birthday. 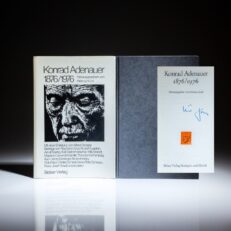