Major General Henry T. Allen (1859-1930) commanded the 90th Infantry Division during World War I. At the conclusion of the war, he was appointed commander of the American Forces in Germany. Earlier in life, he received national acclaim for his exploration of the Copper River in Alaska (1885), along with the Tanana and Koyukuk rivers, traversing over 1,500 miles through unexplored terrain. His expedition has been compared to Lewis and Clark in its scope. Allen died in 1930 and was buried in Arlington National Cemetery. The recipient of this book, Julian Leonard Street (1878-1947), was an American writer and reporter for the New York Mail and Express. 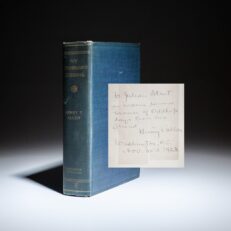