General Omar Bradley (1893 – 1981) was a decorated army commander during World War II. He commanded the II Corps during the Allied invasion of Sicily, the First United States Army during the invasion of Normandy and ultimately the Twelfth Army Group, which comprised all members of the United States Army serving in Western Europe and stands as the largest United States Army formation in history. After WWII, he served as the first Chairman of the Joint Chiefs of Staff. He became the last general to be promoted to the five-star rank, known as General of the Army. 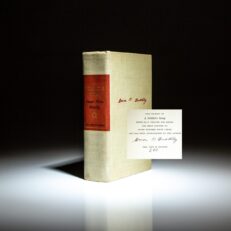