Octavo, ix, [5], 287pp. Blue leather, title in gilt on spine. All edges gilt. Silk endpapers. Laid-in paperwork from the Easton Press. Free of any marks or notations. From a limited edition of 1880 copies, this being number 1718, signed by Senator Bob Dole.

Bob Dole served in the United States Senate from 1969 to 1996, serving as Majority Leader for one year, just prior to his retirement. He was the 1996 Republican presidential nominee, losing to President Bill Clinton. He is married to former Senator Elizabeth Dole. 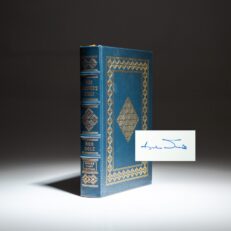