As You Were, Cannon Company

Signed first edition of As You Were: Cannon Company, by Howard D. Ashcraft.

Octavo, x, 182pp. Maroon cloth, title stamped in gilt. No additional printings on copyright page. Free of any marks or wear. In publisher’s very good dust jacket, light shelf wear and foxing to paper. Signed on the front free endpaper: “For ‘Ed’ This book comes as a gift from Rod Albane. May you enjoy ‘As You Were.’ Howard D. Ashcraft.”

The 34th Infantry Division was the first American division to deploy to Europe during World War II. They fought in the Italian Campaign, landing at Salerno on September 9th, 1943. Known as the Red Bull Division, they were under the command of Lieutenant General Mark Clark. During 1944 and 1945, they fought along the Gothic Line against Field Marshal Kesselring’s forces. In the end, the division participated in six major campaigns in North Africa and Italy. 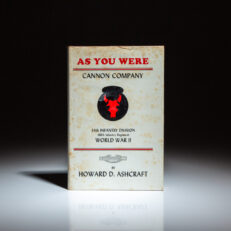