A Time To Heal – The Autobiography of Gerald R. Ford

Comments: Gerald R. Ford served as Vice President following the resignation of Spiro Agnew in 1973. In the wake of the Watergate Scandal and the resignation of President Richard Nixon, Ford assumed the presidency in 1974. He served from 1974-1977, before being defeated by Jimmy Carter during the 1976 presidential election. 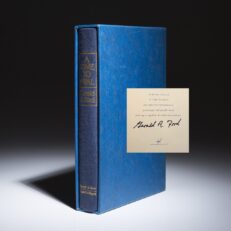