The Pound Conference: Perspectives On Justice In The Future

× Ask a Question re: The Pound Conference: Perspectives On Justice In The Future
SKU: 11287 Category: Law

Octavo, 377pp. Blue leather, title and speakers’ names in gilt on cover, title stamped on spine. Light dust along top edge, some wear to front cover. When this copy was inscribed to Judge Sessions, he was serving as the Chief Judge of the U.S. District Court of Western Texas. In 1987, he would be nominated by President Ronald Reagan to serve as Director of the FBI. Inscription reads: “For Hon. William S. Sessions, With appreciation for many contributions – and best wishes. Warren E. Burger. 6/20/80.” A fine association copy. 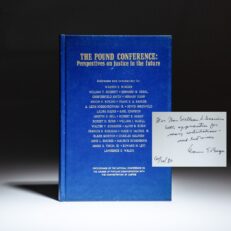 You're viewing: The Pound Conference: Perspectives On Justice In The Future $950.00
Add to cart