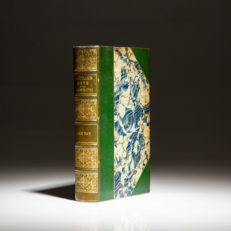 You're viewing: Castilian Days – With Illustrations by Joseph Pennell $175.00
Add to cart