Correspondences from Associate Justice of the Supreme Court, Sonia Sotomayor

A collection of three letters from Sonia Sotomayor to Florence Edelstein, wife of Judge David Edelstein, who served with Sotomayor on the United State District Court of New York. Letters include a signed thank you note referencing Sotomayor’s nomination to the Supreme Court, and two personalized thank you cards. In custom blue cloth chemise. All notes with original envelopes. Provenance: Estate of Florence and Judge David Edelstein, Doyle Historical Auctions, 2019.

Comments: Manhattan District Court Judge David N. Edelstein was nominated to serve on the federal court by President Harry Truman in 1951. He served as the chief judge of the Southern District of New York from 1971 to 1980 but continued to practice until his death in 2000. He is best remembered for the antitrust actions taken against I.B.M. and his efforts to seek out corruption in the Teamsters Union. He was the last serving federal judge appointed by President Truman. 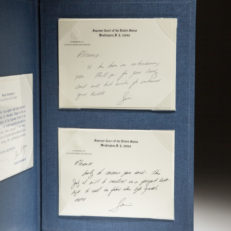 You're viewing: Correspondences from Associate Justice of the Supreme Court, Sonia Sotomayor $850.00
Add to cart