× Ask a Question re: Collection of Correspondences with Sonia Sotomayor – Judge of the United States Court of Appeals for the Second Circuit
SKU: 2452 Categories: Influential Women, Legal History, Supreme Court

A collection of four letters from Sonia Sotomayor to Judge David Edelstein, who served together on the United State District Court of New York. The District Court of Southern New York, due to its coverage of Manhattan, is one of the most active federal courts in the United States. These four letters, all with accompanying envelopes, cover a range of topics, such as thanking the Edelsteins’s for pictures, news articles, conveying accolades from Vice President Al Gore and wishes for good health. Housed in custom blue cloth folio, title on label affixed to front cover. Provenance: Estate of Florence and Judge David Edelstein, Doyle Historical Auctions, 2019.

Comments: Manhattan District Court Judge David N. Edelstein was nominated to serve on the federal court by President Harry Truman in 1951. He served as the chief judge of the Southern District of New York from 1971 to 1980 but continued to practice until his death in 2000. He is best remembered for the antitrust actions taken against I.B.M. and his efforts to seek out corruption in the Teamsters Union. He was the last serving federal judge appointed by President Truman. 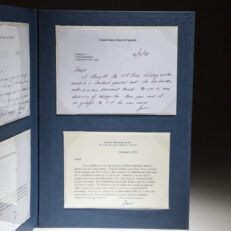 You're viewing: Collection of Correspondences with Sonia Sotomayor – Judge of the United States Court of Appeals for the Second Circuit $1,200.00
Add to cart