Counsel To The President: A Memoir

Signed first edition of Counsel To The President by Clark Clifford and Richard Holbrooke, inscribed to Helen K. Copley of Copley Newspapers.

Richard Holbrooke was the U.S. Ambassador to the United Nations during the Clinton Administration. He also served as U.S. Ambassador to Germany and Assistant Secretary of State. After retiring, he was a Foreign Policy advisor to Senator John Kerry and Senator Hillary Clinton. His final position in government was to serve as Special Advisor to Pakistan and Afghanistan under President Obama. Many believe that he was first in line to serve as Secretary of State, if John Kerry or Hillary Clinton had won the Presidency in 2004 or 2008. Holbrooke passed away in 2010. 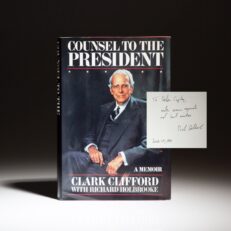 You're viewing: Counsel To The President: A Memoir $250.00
Add to cart