Log Of The President’s Inspection Trip And Cruise On Board U.S.S. Potomac

President Franklin Roosevelt’s Log of the President’s Inspection Trip and Cruise On Board the U.S.S. Potomac, signed by the president to his lead secret service agent.

Log of the presidential cruise to the Bahamas in April, 1941. The USS Potomac would serve as a decoy to allow President Roosevelt to escape to Newfoundland to meet with Winston Churchill during World War II. Mr. Reilly served as head of President Roosevelt’s security detail throughout W.W.II, leaving the White House detail after his death. He would later serve as an advance man for Governor Adlai Stevenson. 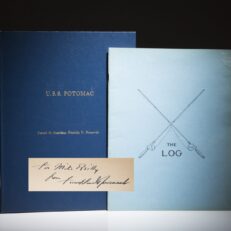 You're viewing: Log Of The President’s Inspection Trip And Cruise On Board U.S.S. Potomac $4,800.00
Add to cart