The FBI Story: A Report to the People

× Ask a Question re: The FBI Story: A Report to the People
SKU: 10864 Categories: Law, Supreme Court

First edition of The FBI Story: A Report to the People by Don Whitehead, inscribed by FBI Director J. Edgar Hoover to the founder of the AFL-CIO, George Meany.

George Meany was an American labor leader for most of his life. He was a key figure in the creation of the AFL-CIO, serving as its first president from 1955-1979. Meany was an ardent anti-Communist. His address to the FBI Graduating Class of 1956 is featured in this book, where he says “any system of government in which a party is the government – particularly when there is only one party with absolute power over every walk of life – cannot be government by law.” His anti-Communist stance and efforts to fight Mafia influence in organized labor were supported by FBI director J. Edgar Hoover. George Meany died in 1980. 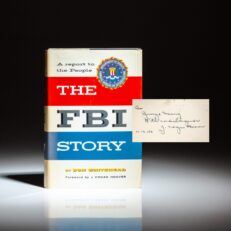