Octavo, xviii, 233pp. Beige cloth, title stamped on spine. No additional printings on copyright page. In the publisher’s very good dust jacket, retail price on front flap, light shelf wear, closed tear along spine, bright illustrations. This copy is inscribed: “To Judge Warren E. Burger, With deepest gratitude and fond remembrance for wise guidance in an introduction to my career at the bar. W. Reece Bader. May 31, 1968.” W. Reece Bader was a law clerk for Judge Burger while he was serving on the United States Court of Appeals, the year before Burger was nominated by President Nixon to serve as the 15th Chief Justice of the Supreme Court. 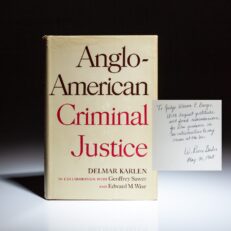