The memoirs of Vice President Charles G. Dawes, Notes as Vice President: 1928-1929, inscribed to General Alexander A. McHardy of the British Army.

Signed on the front free endpaper: “For General and Mrs. McHardy, from their friend, Charles G. Dawes. April 23rd, 1936.”

Dawes met General A.A. McHardy near the end of World War I, when they were both appointed to the Military Board of Allied Supply, tasked with organizing supply operations between allied powers during the war effort. They remained friends, with Dawes visiting McHardy in Great Britain during his tenure as United States Ambassador to the Court of St. James’s. 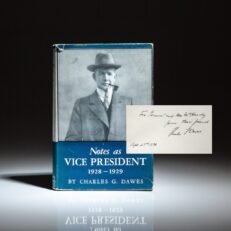