Signed limited edition of A White House Diary by Lady Bird Johnson, inscribed to Thomas G. Corcoran, advisor to President Franklin Roosevelt, architect of the New Deal and a friend to the Johnsons.

Additional inscription on the half-title: “For Tommy Corcoran – who shared these wonderful years – and so many more – a friend for all seasons. Devotedly, Lady Bird Johnson. Merry Christmas! 1970.” An exceptional association copy.

Thomas G. Corcoran (1900-1981) was a principal strategist of Franklin Roosevelt’s New Deal, shaping historic legislation such as the Securities Act of 1933, the Securities Exchange Act of 1934 and the Fair Labor Standards Act of 1938. Along with Benjamin V. Cohen, he created the Securities and Exchange Commission and worked unsuccessfully to “pack” the Supreme Court in 1937. He left the Roosevelt administration after the second term, becoming one of the first modern day political lobbyists. As a lobbyist, he helped his friend, Lady Bird Johnson, gain FCC approval for her purchase of a radio station in Austin, Texas. He also ensured the election of Lyndon Johnson to the Senate in 1948, by using his influence over the Supreme Court to clear Johnson of charges of election fraud in his campaign for the Democratic nomination in Texas. The Johnsons owed much of their personal and political fortunes to the recipient of this book. 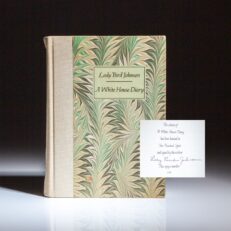