Chatto and Windus issued their 1876 edition of Wilson’s American Ornithology with Bonaparte’s supplement in both octavo and quarto formats. This copy is the quarto, which was printed on large paper measuring 8.5″ x 11″ with hand-colored plates.The Bill Memorial Library was founded by Frederic Bill (1933-1920) of Groton, Connecticut in 1888. The Library was dedicated to Frederic Bill’s sisters Eliza and Harriet and opened with an initial collection of around 1700 books selected by Bill. Frederic Bill had been a book publisher prior to the Civil War, and after the war, a linen goods manufacturer. He retired from business in the mid-1870s. 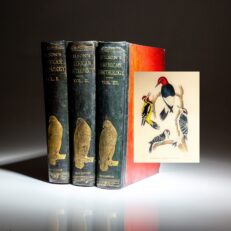