First edition of An Autobiography by Theodore Roosevelt, in fine condition, printed in 1913.

An Autobiography by Theodore Roosevelt was first issued as a serial publication in The Outlook, titled “Chapters of a Possible Autobiography.” The first edition was published in November of 1913, with a planned paper dust jacket and a slipcase. Theodore Roosevelt served as the 26th President of the United States. He was a prolific author, writing more than 18 books during his lifetime, beginning with The Naval War of 1812 in 1882. His other notable works include The Winning of the West, African Game Trails, and The Rough Riders. 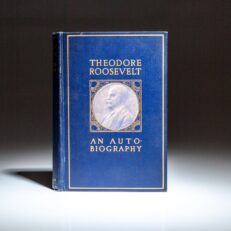