A collection of 50 letters to political leaders regarding veteran pensions, many with notes from senators asking for help from the Bureau of Pensions.

The process for awarding pensions to United States military veterans was a process fraught with controversy and corruption in the late nineteenth century. After the Civil War, pensions were awarded to disabled soldiers based on their length of service. In 1879, the Arrears Act increased the number of eligible veterans and awarded lump sum payments to many. In 1890, the Dependent Pension Act was passed, greatly increasing government support for veterans who were unable to do manual labor, either because of their war injuries or not. In 1907, old age was added as a disability, thereby increasing government support. The last Civil War pensioner was Albert Woolson who died in 1956, with the last widow of a veteran passing away in 2008. 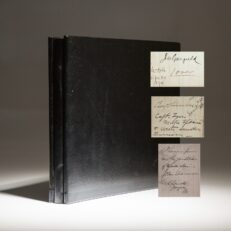 You're viewing: Archive of Political Letters: Pensions $1,800.00
Add to cart