Comments: The author of this book, Senator Malcolm Wallop, represented the state of Wyoming from 1977 – 1995. He was a vocal supporter of President Ronald Reagan on tax reform and national security. He was known to be politically incorrect at times but was admired for his candor. The recipient of this book, William Safire, was a Pulitzer Prize winning conservative columnist for the New York Times. He was a frequent guest on Meet The Press, describing himself as the voice of “libertarian conservatives.” Before joining the New York Times, Safire served as a presidential speechwriter for President Richard Nixon and Vice President Spiro Agnew. 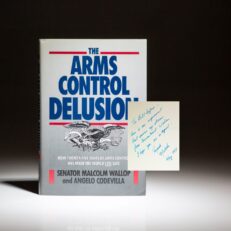 You're viewing: The Arms Control Delusion – How Twenty-Five Years of Arms Control Has Made The World Less Safe. $95.00
Add to cart