A Problem From Hell – America and the Age of Genocide

The scarce first edition, first printing of the Pulitzer Prize-winning “A Problem From Hell” by Samantha Power.

This important work facilitated Samantha Power’s introduction to Senator Barack Obama and eventually her nomination as the United States Ambassador to the United Nations.

Comments: What began as a short paper on the history of American responses to genocide quickly became this Pulitzer Prize-winning work by future United States Ambassador to the United Nations, Samantha Power. Her other works include The Education of an Idealist and Chasing the Flame: Sergio Vieira de Mello and the Fight to Save the World. 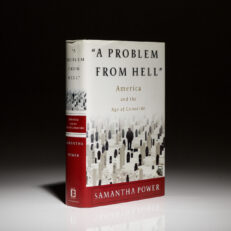 You're viewing: A Problem From Hell – America and the Age of Genocide $175.00
Add to cart