× Ask a Question re: Behind the Scenes – In Which the Author Talks About Ronald Reagan and Nancy Reagan…and Himself
SKU: 1892 Categories: Presidents, Ronald Reagan, U.S. Politics

Comments: Deputy Chief of Staff Michael Deavers spent 30 years with Ronald Reagan, following him to the White House in 1981. He was part of the “The Troika,” along with Chief of Staff James Baker and Ed Meese. In 1987, he was convicted of perjury regarding lobbying efforts on the part of the administration. He remained loyal and close to the Reagans the rest of his life, even telling Reagan that he would not accept a pardon. 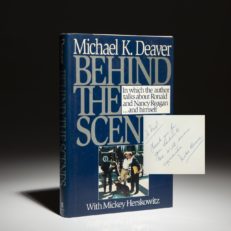 You're viewing: Behind the Scenes – In Which the Author Talks About Ronald Reagan and Nancy Reagan…and Himself $125.00
Add to cart