Professor G.M. Trevelyan is considered by many to be the preeminent British historian of the early 20th century. His numerous works, mostly focusing on British history, were widely read in academic communities and by the public alike. This work, Blenheim, is the first volume of his magnum opus, and was followed by Ramillies and the Union with Scotland (1932) and Peace and the Protestant Succession (1934). 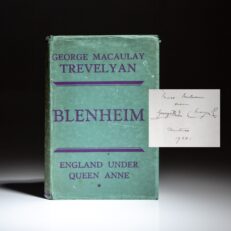 You're viewing: Blenheim: England Under Queen Anne $750.00
Add to cart